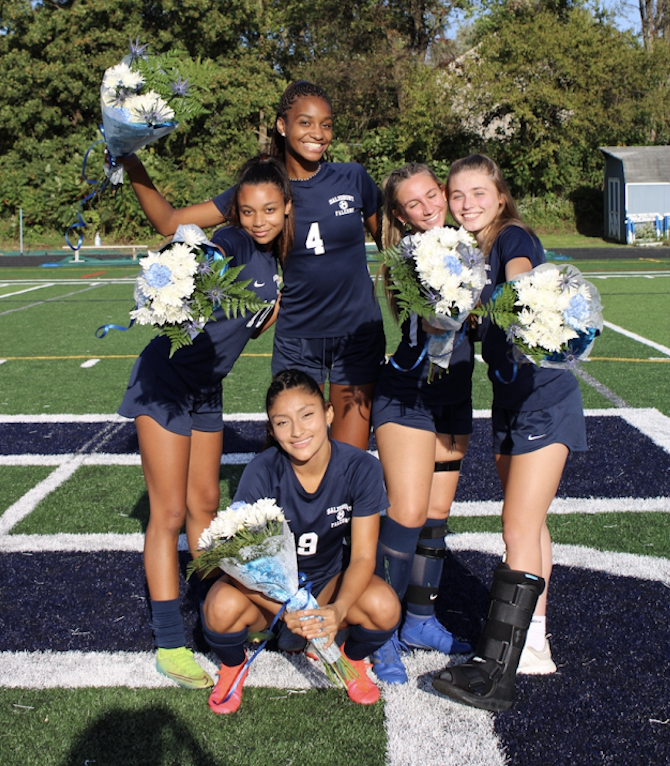 by Katherine Medina, senior captain of the girls soccer team

At the 4:30 start of the ceremony, Aaliyah M’bai took her first steps onto the turf with her family, later on followed by the other seniors and families. Underclassman caringly handed bouquets of flowers as the seniors lined up facing the stadium bleachers.  Mr. Pearce announced the senior bios as each player strided the turf. The clock ticked closer to 5pm, the moment of kick off.

The starting line up consisted of all 5 seniors including Quinn Wittman who suffered a high ankle sprain late September. Quinn passed the first ball of the 2021 senior night and following the sound of the stadium applause, she walked off with her crutches in both arms and her head held high.

In the heat of the moment, center midfield player, Aaliyah M’bai paced up the right wing field, she shot to the top right corner of the goal and initiated the crowd’s roars. Her joy in her work and the smile she vibrantly displayed, left the crowd wondering, is M’bai coming back for more? And then she did, not once or twice, but 3 total goals in the matter of 15 minutes. She walked off the field during halftime with 3 more accomplishments to add to her goal list. In the halftime circle Aaliyah said, “It feels great to score my second hat trick of the season. It was very unexpected but it felt great.”

Goalkeeper Hannah Kamp played an exceptional game teeming with high and low saves. Hannah’s punts really pushed the team past the 50 yard line. Constant saves and supportive commands came from the 16 year old junior. Hannah had this to say after the senior night game: “ I’m so proud to have the opportunity to play with these seniors on their special day. As it will be sad when they leave. They will have left a lasting impact on all of us players and I hope to carry on their legacy.”

The falcons ended their game with a 3-1 win. Coach Babyak had this to say, “We played with aggression in this game. They beat us at 1-2 passing so we had to cut them off. Preparing ourselves for the next game is crucial, but I am proud of this win for our team.”

Closing the night with a win, a memorable ceremony and loving fans all wrapped under the stadium lights was a perfect way to unwind the day. As the crowd left, the lights started to dim, awaiting for Thursday October 7th for their next home game against Moravian Academy.